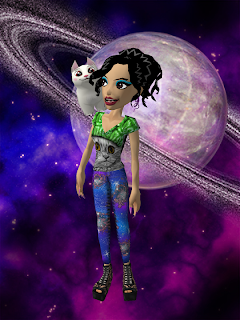 Well, his photo appears at least. The content producer at my work wanted a cat portrait on a t-shirt and asked if I minded if we used one of my cats. Of course, I was delighted to use one of them and for the design that was described, Sheamus Popoki was the best one suited for it.

Above you see the T-shirt with Sheamus on it. The green part is supposed to be brains, but whether it reads as brains or not, who knows. My fluffy boy is on Meez!

And yes, I gave him extra cuddles for it. No treats, just cuddles. I don't want him to get a swelled head and make the other two jealous :)
Posted by Marlene at 1:30 PM