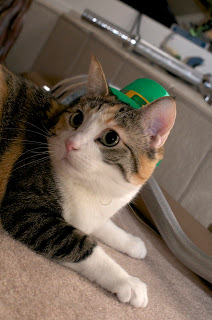 Chani is still my best model. She makes a rather adorable kitty leprechaun. 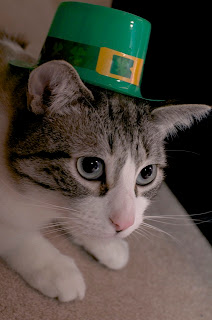 9 makes a soulful one. 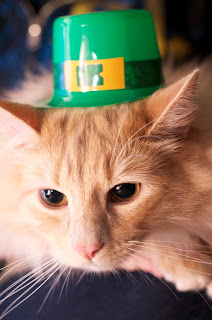 And Sheamus... well, with his looks and his name, he is the best kitty leprechaun ever!

Happy St. Patrick's Day everyone!
Posted by Marlene at 7:00 AM 6 comments: 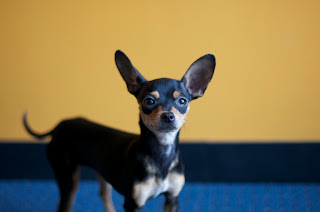 Last week, a co-worker brought her puppy into the office. Everyone, meet Roxy! 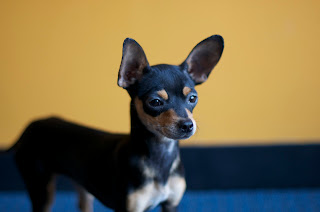 She is so tiny! I think she is about half the size of 9 if even that! Roxy is very sweet and friendly. She spent most of the day sitting in her mommy's lap, but she sat in my lap too. At the end of the day, Roxy was kind enough to pose for me to take some photos.
Posted by Marlene at 7:30 AM 4 comments:

When Sheamus Popoki chases his tail, one can only giggle. 9 and Chani view this and I'm sure they are thinking: "What a doofus!"
Posted by Marlene at 7:00 AM 2 comments:

Snuggles on a Sunday 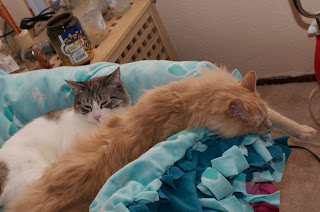 Not completely snuggling, but close enough. Happy Sunday!
Posted by Marlene at 7:00 AM 3 comments:

And now back to our regularly scheduled kitties... 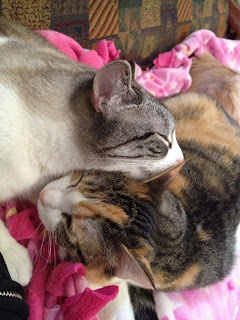 9 keeps Chani's ears clean. Thank goodness because that right ear of hers is always so icky! 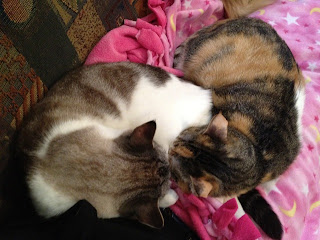 And then, they sleep... on me, the human kitty sofa. Sheamus Popoki is further down. That little bit of orange you see by Chani's behind... Sheamus Popoki's floofy tail.

Oh, and just to let Chilli of Cat with a Garden know, Chani is not quite so slender any more. She's quite silky... but slender is not something we can describe her as. With the elimination of her tapeworm, Chani has chunked out quite a bit. Her new nickname is Princess ChunkyPants, but we don't call her that to her face too much. I don't want to hurt her self esteem when she is so happy with herself.
Posted by Marlene at 10:01 AM 6 comments:

The Last of Shoyu the Grey 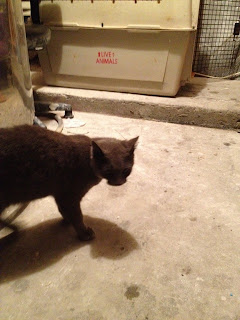 In the above picture, you can see a doggy crate that I got from my friend. I really wanted him to have space in case I had to crate him while I was at work (I have a water softener that gets changed out once a month and I would have hated if Shoyu ran out while it was being changed!)

Shoyu did NOT like being in that crate. He kind of panicked, jumped around and knocked his water into his dry food. I had to put him in the crate because I needed to move my car out of the garage. Yes, I did it in the wrong order. I should have moved my car and then put Shoyu in the garage. Yup... my bad. 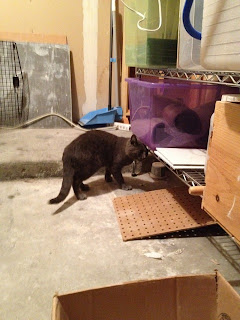 At any rate, I let him out as quickly as possible and he explored. It only took 2 visits from me for Shoyu to learn that I did not want him to leave the garage. On the 3rd visit, when I went to leave, he stayed behind. What a smart boy! 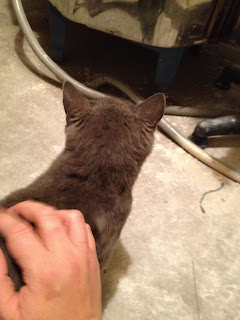 And he loooooved getting petted. One way that I was able to get him back into the garage after his first 'escape', was to walk away. Shoyu darted between my legs, almost tripping me, and then would stop right in front of my right leg and lean against me. I bent down and petted him. At first, he would dance a short distance away and then come right back. After that first hesitation dance, he was all ready for the pets. Then, I was able to pick him up. 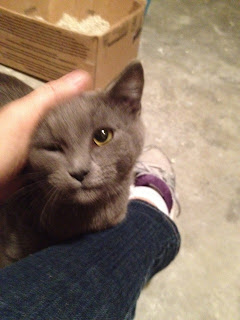 Finally, I sat down in the garage with him. Shoyu would weave in and around my legs and just purring up a storm

Now, why did I title this "The Last of Shoyu the Grey"? Well, a friend of mine was able to connect me to her step-dad who is a pretty awesome cat guy. He feeds a local colony of ferals and has fostered many kittens. Mr. E (yes, his last name begins with E) came by on Saturday and picked up darling Shoyu.  Shoyu mewed a lot while being put in a carrier and boy, the look he gave me when he was put in... heartbreaking. But he relaxed and was taken to his foster home. (Note to self, kitties are ok if put into a small crate that they can't shake or move about if they don't have enough room to jump and bash against walls!)

Yes, I shed a few tears later that night, but really, it's for the best. Shoyu is one handsome, intelligent and obviously affectionate kitty. Still, I can't have 4 kitties in my condo. It is just too much for our small space (and I'm running out of room on my bed. At the rate that Sheamus Popoki is growing, I am going to need a King sized bed soon!). My mom was interested again, but she and my dad will be traveling a lot in the next few months, so they really couldn't take him. So, for Shoyu's best interests, I got him to a foster home with connections to an adoption center.

I received an update this morning. Shoyu calmed down quickly and LOVES to be petted. He was taken to the vet to get his shots and tests. The adoption center thinks that he will be adopted very quickly. Mr. E says that he will email me when Shoyu gets adopted.

I do miss the adorable little guy, but I am happy that he will find a loving home.

Note to self #2: no fostering for me! I get attached way too quickly!