Well, what do we have here? Spotted toesies on an orange kitty? Who could this be? It's Gary! Gary is a furfriend who lives in Big Sur with Mak and Pam (Yes, I spent the 4th of July with Mak, Pam, Mikey Awesome and another couple... we are all friends via World of Warcraft).
Gary is a big boy. His girth expanded when Mak and Pam adopted two rescue kitties (see below) and he just loved the kitten food. One of his nicknames is:  GarBear... I spent much of the weekend picking up Gary and just hugging him.  He wasn't too keen on that, but he put up with me. 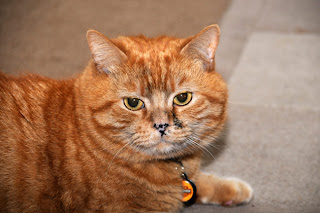 Next up is The Princess.  She is so pretty.  Her head is rather tiny compared to her floofy and yet solid body.  I love the Princess. Though, I'm not sure she loves me all that much. 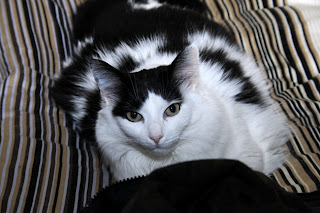 This is Moxie Crime Fighter.  Moxie is one of the two rescue kitties that Mak and Pam adopted last year (Come to think of it, Gary and Princess were rescues as well). Mak and Pam swear that Moxie has no soul and only exists to steal your soul.  I was able to pick her up once but Pam said that I confused Moxie. Apparently, they only pick up Moxie when she's done something wrong... Corporal cuddling as a punishment.  Ah well, I had fun. At least she didn't bite my toes under the covers as she used to do to other guests. 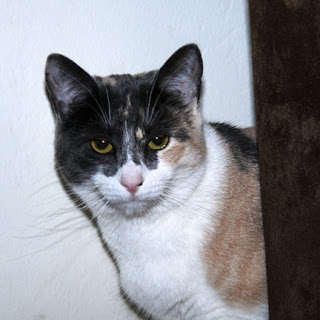 Finally, this is Tsunami, the force of Nature. Tsunami was a very shy kitten and no one wanted to adopt her. Of course, Pam saw that and just had to bring her home (the adoption group gave Tsu to Pam for free they were so sure that Tsu would not be adopted... can you blame Tsunami for being shy? I mean, here she is at a pet store, in unfamiliar grounds and being handled or stared at by a bunch of strangers! However, she was quite playful when she was in her cage, so Pam knew that Tsu wasn't as shy as everyone thought). Tsunami loves to taunt cat lovers who want to pet her and love on her. She will act like she wants you to pet her, rubbing against furniture, arching her back. However, as soon as you go to pet her... she takes off.  Ah well... The only time I was able to pet her was when she was lounging in her tower. Even that was almost too much for her. Needless to say, I was not able to pick up Tsu at all. 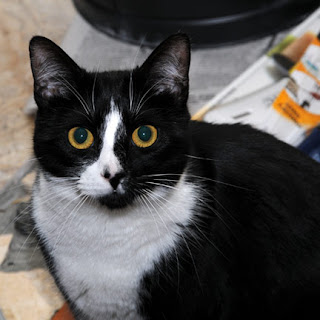