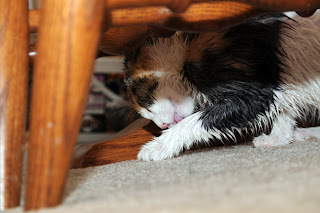 So, as I have tweeted and blogged, poor Chani has fleas. Last night, I bought some DeFlea Pet Shampoo. No, I did not get it at Petco, but you get the idea.
I decided to 'tackle' Chani first. I knew that she would be a bit more difficult to bathe compared to 9 as she's a bit more of a Princess and 9 is very flopsy.
After reading a few tips on how to bathe a cat, I filled up the bath tub with few inches of warm water, stopped the water flow (which is what cats fear/dislike the most, I read) and stopped it up. Then, I got a little plastic tub to pour water on Chani.  Picked her up, put her in the bath and started the bathing process.
If you ever want to hear one of the most heartbreaking sounds, listen to Chani meow while I'm giving her a bath. I felt so bad! But, it needed to be done.
While wet, it was much easier to see all the fleas infesting my darling girl. 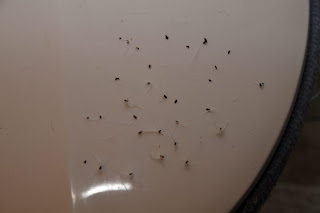 Those are the evil bloodsuckers I managed to pick off of her after I slightly dried her off. I had to use tweezers to get them and some of them were still alive. Poor Chani had to get shampooed up twice as well as rinsed off twice. My heart was breaking as I was trying to make reassuring noises to my dear little girl.
I slightly dried her off with a Shamwow (no, I'm not trying to plug products here), cradled her and picked the fleas off of her. She was shaking as I did this.  I feel horrible that I had to put her through this! 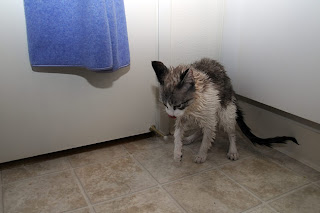 Of course, 9 had to get a bath too. What was surprising was how 9's tail poofed up as he waited outside listening to me bathe Chani. I think it seriously stressed him out and frightened him when he heard Chani's wailing meows. He was good and only meowed in complaint once as I bathed him. 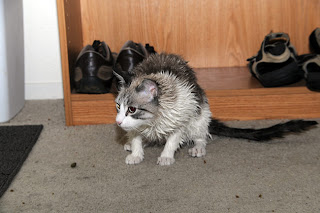 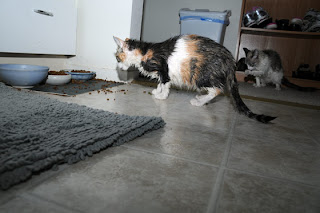 After they both had settled down after their baths, I gave them treats. Chani has let me pick her up since and while she hasn't purred, she didn't struggle against me and treat me like I was the most horrible person in the world. 9 has come up to me and stood next to me. Chani hasn't yet.
I hope she forgives me.
Oh, and I should mention that neither cat scratched me while I was bathing them. Although Chani did try to escape, her back claws did brush against my arm, but nothing purposeful. She did try to climb into my shirt to get away.
---
On a lighter note, in looking at these pictures, I really need to vaccuum our front entry way and sweep around their food area.  Ugh! How messy!
Posted by Marlene at 9:43 AM