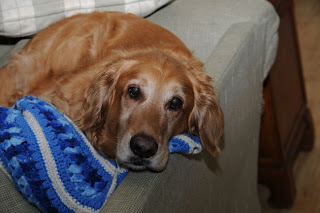 This is Lucky. He's the old man about the house. 11 years old or so. He's the sweetest dog and will often 'bathe' Fluffy. If I am ever to get a dog, I would be blessed to have a dog like Lucky. He was named "Lucky" because Uncle, Aunty and my cousins felt lucky to have him. 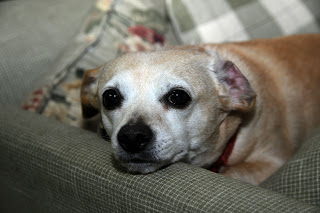 This is Scruffy. Scruffy was found around my cousin's school many years ago. No one claimed him. My Aunty just couldn't resist him. He had some behavioral issues when he first came to their family, and many times my Uncle would want to take him to a shelter. However, Aunty and my cousins were already attached and my Uncle, who will not admit how big a softy he is, was attached too.  Scruffy has calmed down a lot since I first met him. He's a bit rambunctious still, but who can resist a dog who will come and sleep between your legs like a cat.  Yes, I'm attached to him too. They're not quite sure how old Scruffy is. He's younger than Lucky, but not by much. 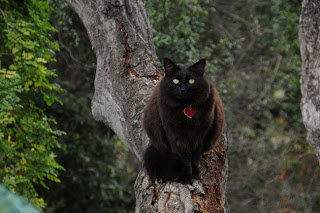 This is Fluffy. (Please don't ask me about the names ending in 'y'). She was the neighbors' cat at my relatives' previous house. Fluffy kept coming over to Aunty and Uncle's, so the neighbors finally decided to give her to Aunty and Uncle. Since moving in with Nana (Aunty's mom), Fluffy has become Nana's cat. Fluffy rules the house and the dogs (Nana too). She will wait by the door to come in. Nana will open the door and Fluffy will walk away. Nana is convinced that Fluffy is afraid of Lucky and Scruffy and the male voices in the household. Uncle is convinced that Fluffy is just displaying her power. She's 11 years old too. Fluffy let me pick her up this past time. Well, I always have to pick up kitties! So, I was happy that although she kind of ran away from me in the beginning, she did let me pick her up when she wanted to go outside in the morning. 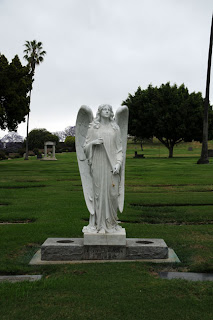 Finally, this is a photo of a gravestone in Inglewood cemetery. Part of my reason to go to LA was to look for 'creepy' gravestones like this that I'll be able to use for my work. Yes, I'm already working on Halloween content. Sigh... This was a beautiful cemetery with a lot of history(for Los Angeles that is. One gravestone had a birth date in the 1800s, but no death date. Not sure why that is...Vampires?). Some of the statuary was simply beautiful and so moving.
Sorry to end on such a somber note, but I had to post that picture. Tomorrow, we'll return to our usual reporting on 9 and Chani's antics.
Posted by Marlene at 8:05 PM