Greetings everyone!  Welcome to this kitty blog, or shall I say kitties.   I adopted this pair of darlings from The Cat House/Community Concern for Cats in California.  Before, I've only been owned by a single cat.  Being owned by two shall be quite the new experience for me.
Both have a 'geeky' first name and a Hawaiian middle name (Mom insisted that both have Hawaiian names even though we're Japanese and not Hawaiian... guess it's because Mom and Dad grew up on the Islands). 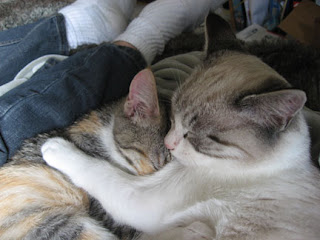 First up is 9 Kai.  9, for short, is a 4 month old Snowshoe mix. He's an adorable purr monster who just doesn't stop the playing or the loving. As I write this, he's sitting in my lap napping. I'm making sure to not move my legs even though I've got one tucked under and that will lead to a lot of stiffness and pain for me later. However, as we all know, kitty in lap means no movement on the part of the human.
"Kai" means "sea" in Hawaiian and "shell" in Japanese. As for why "9", that's a story for another time.
Getting the picture below was entirely by luck. This boy is in constant motion and loves to charge the camera. 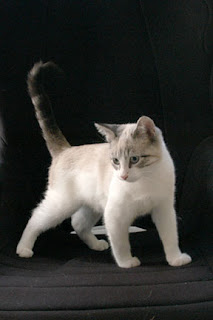 Next up is Chani Hokulani. I've been told that she is about 4 months old too. She seems a bit small for that though. Her foster mom said that she's always been much smaller than her foster siblings and was picked on a lot by the boys. I was worried a bit when I decided to bring her home (Chani and 9 were in the same cage when I went to the adoption fair.  They were sleeping on each other, so I knew they were somewhat compatible.) Their foster mom told me not to worry. Chani could hold her own and give it right back to 9 at any time. So, I brought her home with 9 and after watching her in action for a few days, I have no worries about her being put upon too much. She's feisty and often instigates the 'fight' time.
"Chani" is from Dune, one of my all time favorite novels. "Hokulani" means "Star of Heaven" in Hawaiian. 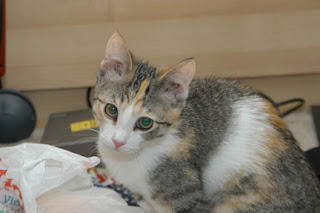 Chani is a bit shier than 9. Whereas 9 instantly purrs as soon as you look at him, Chani will meow for your attention and then take off when you look at her or make a move toward her. Still, once you catch her, she's warms up pretty quickly and starts her engine up.
Both of them sleep with me now and it's so wonderful waking up with two warm little bodies next to my shoulder.
I'm a bit of a camera hound, always taking photos, but I take forever to upload them all to my computer. Still, I will try to stay on top of things and keep things current in this blog!
Posted by Marlene at 2:52 PM