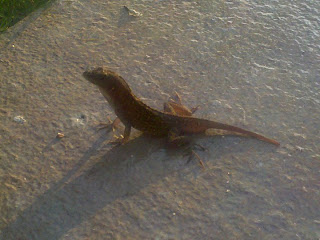 Ah Maui, so happy to be here. I miss 9 and Chani, of course... but it's really nice to be here and visit family and friends.

Tonight, while eating at the Black Rock Steak and Seafood grill at the Sheraton Lahaina, my family and I were lucky to see two geckos. The first was rather young. You could tell that he had never lost his tail and just his proportions made him look young.

The guy in the picture above has been around. His new tail didn't have the scales fully formed. He did have a rather impressive chest that he blew out quite a lot. I think he was trying to intimidate the young gecko.

We visited my Aunt and she has a long hair cat named Mika, who looks like a combination of a Persian and a Siamese. Beautiful blue eyes. Aunty also has a dog named Patchy too. I didn't have my camera out, so no pictures. Maybe on Wednesday, I'll be able to get some.