A Becky update, a New Friend and Synchronized stretching 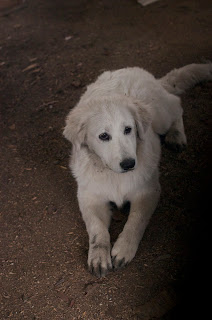 Becky is getting to be such a big girl! She is smart and sweet and well, just not a puppy any more. She's quite the teenager now. 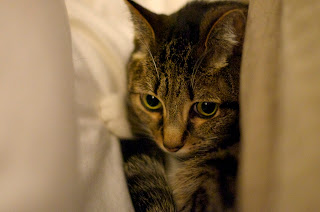 This is Tocho which means "tiger" (I can't remember which language). I helped rescue this kitty many years ago when she was about 2 months old. She was separated from her momma way too early and there was some evidence that she was abused (whiskers were burnt) by her original "owners" who were homeless people and from what I have heard more than a little cracked out. She was 'rescued' by another homeless person who was slightly less cracked out at the time and who gave her to a friend of mine. My friend could not keep another kitty so when I found out, I called another friend, Mr. J who had just lost his family cat. He accepted Tocho provisionally, saying that his wife had to approve of all this. However, as soon as I presented Tocho to him, he took her from me and I never got to hold her for the rest of the visit. Tocho was his. She sat on him and purred and basically claimed him.

Mr. J's wife, Ms. L, named the kitten, Tocho, in order to somewhat balance the horrible start in life that she had. You know, give the kitty a strong, fierce, powerful name and she will become strong and fierce and powerful. 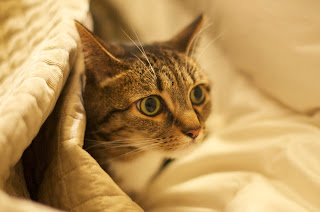 Well, it sort of worked. Tocho is usually pretty sweet to Mr. J, though she is scared when they have too many people visiting and will hide under the bed covers (where I took these photos). And, every now and then, she gets the crazy look in her eye and all hands and other exposed body parts have to be hidden from Tocho's teeth and claws. I hope Ms. L forgives me one day for this. I think she has as I do still get invited to parties and she talks to me hehe. 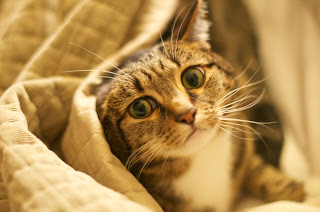 At any rate, Tocho loves her daddy and although she barely tolerates anyone else, she does tolerate me as I did get to pet her. I like to think she remembers me in a tiny part of her mind/heart. 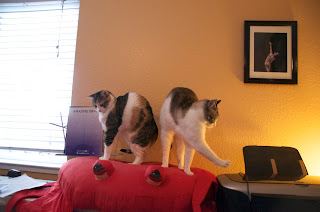 Finally, a photo of 9 and Chani as they woke up from their nap upon Mr. Crab. It was almost dinner time and they needed to fully rest up before eating. Right?
Posted by Marlene at 4:45 PM