On Saturday, Sheamus Popoki visited the VET and I was rather bad at taking photos. On the plus side, Sheamus was a very good boy even though I had to hold the carrier vertically to get him out of it. He tried to find a hiding spot, but alas, there was none to be found. I picked him up and that sort of comforted him.

Sheamus now weighs 11.2 lbs or so. I thought he'd be much heavier as he feels much bigger and he is so much longer than 9. Still, he has gained 3 lbs since last year (he's filled out) and made nary a sound when he got his shots. And he didn't even react when he got his temperature taken. My poor boy.

Honestly, I think he (and Chani) has flashbacks whenever I put them into their carriers. I'm sure that they are convinced that I am taking them to an adoption fair which stressed them out a lot when they were younger, no doubt. However, I made sure to reassure him and give him treats when he came home. 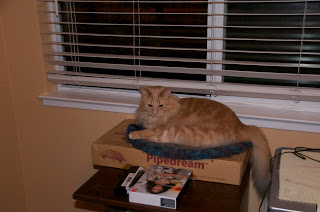 The stress in my life is far too much for this kitty. I must rest. And hmmm... why is this Adobe box sitting here? Mom, are you being remiss in installing the new CS6 creative suite? Seriously, first you do not post enough on our blog. Second, you do not take enough photos of us with the good flashy box thing, only your phone and third, you do not install software that you bought last year. Bad Mommy!