Ahh, the Irish weather. Of course, now that I'm inside, posting the photos of this morning and early afternoon... all taken in cloudy grey weather conditions, the sun is finally coming out. Blue skies abound! Grrrr... 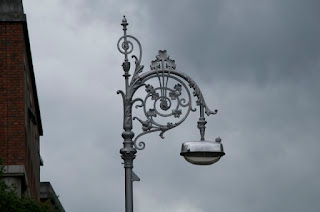 Ah well, what can you do. We're in Dublin now. Along some of the brick buildings (formerly tenements) built by one of the Guiness family, lamp posts like the above line the streets. The thing about these tenements, they had indoor plumbing! Apparently, that was a big thing back in 1759. 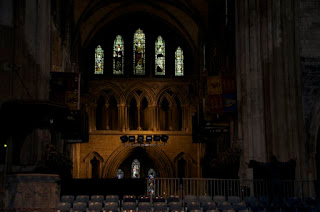 The main altar of St. Patrick's Cathedral. This is actually an Anglican church, not a Catholic one. It's quite beautiful inside. There's some concert going on, so this is as close to the altar as we could get. 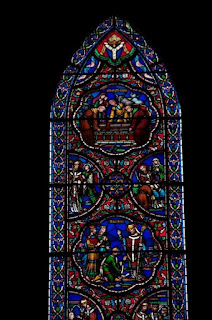 One of the stained glass windows in the Cathedral. 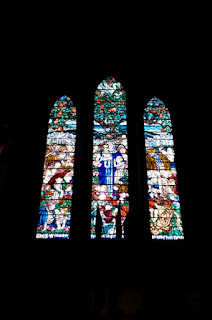 Another set of stained glass windows. 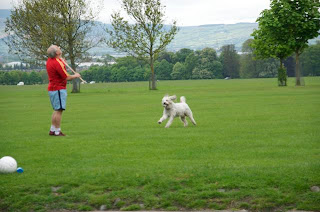 After the tour of St. Patrick's Cathedral (oh, the geek side of me has to say, I saw where Sir Richard Boyle... Boyle's law! for those science geeks out there hehe).

Anyhow, at Phoenix Park, we saw a this man with a hurling bat, hitting balls for his woofie. This dog was really active and just couldn't wait to chase and retrieve the ball being hit. He looked so excited and happy. 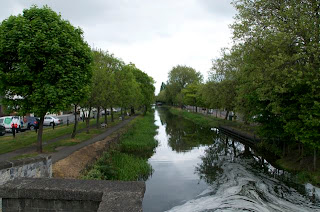 The Great Canal near by the hotel. I have to say, I'm not really fond of the Burlington hotel here in Dublin. The shower water temperature went from lukewarm to scalding a few times, and it flooded the bathroom. The beds are comfortable enough, but not quite... they're very light. I bumped into one and it moved... quite easily. And my view is very boring :( I guess that I just prefer the Killarney hotel. Ah well, what can you do but enjoy as bets you can. 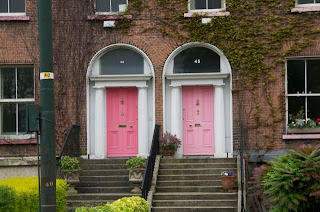 Oh, one thing that Dublin is known for is the Georgian architecture. The doorways have these fanned arches and multi-color doors. This pink pair tickled my fancy. Apparently, the doors were all originally one color, black. But, when men would come home, they often went into the wrong door and into the wrong bed. The women of the town came up with the plan of varying the colors of the door and design of the arches. The men's excuse was then, "We're color blind." when they still ended up in the wrong house. Excuses. Excuses.

Ok, so tonight is my last night in Ireland. We head out early tomorrow. So, I won't be posting in the next few days. BUT, I will be getting my 9 and Chani back soon. Hooray!
Posted by Marlene at 11:57 AM