About a week ago, Mom started to get really protective of Chani. This all started when one evening, 9 was playing with a giant plastic bag and got stuck under one of the handles and ran all over the family room, living room and dining room creating a huge ruckus. Chani was upstairs at the time and did not see what the giant noise was. And so, Chani was terribly freaked out and refused to come downstairs for about a day and a half. After this, Mom became very caring and nurturing to her little female grandcat, trying to win Chani over. She's succeeded a bit, but Chani's still being picky about who she will deign to give her notice.

What does this have to do with today's blog post? Well, 9 has always been a bit of an attention hog, stealing Chani's toys and lately, kicking her off of her tower. After such actions, he will then sleep on the top of his newly conquered territory..

Mom had enough of that. After a few days of telling me that we needed two towers (yes, TWO towers), one for each cat, she and my dad finally bought Chani her own tower... 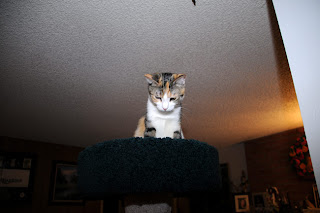 Queen Chani atop her new tower.

Now, what do you think 9 has done? Yes, he has decided that this tower must also be his and will try to knock Chani off of it. 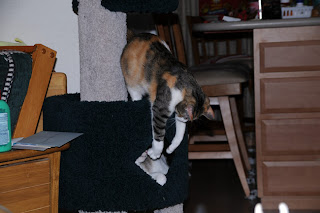 But, Chani defends her tower with a little help from the humans in the house. 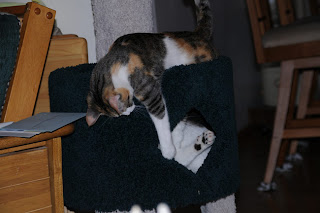 9 likes to go into the little cubby hole too. He barely fits. It's kind of funny to watch him squeeze his behind into such a small opening. Then, hilarity ensues as paws go thwap thwap thwap, waving about at each other. 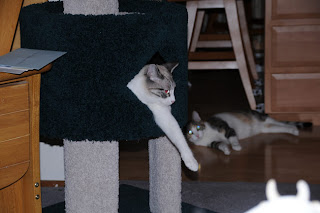 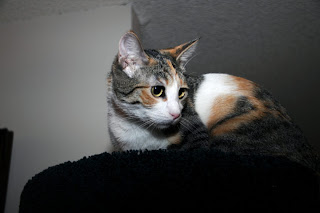 Anyhow, Chani is happily enjoying her new throne. Personally, I think the green matches her coloring better the solid tan tower.
Posted by Marlene at 9:16 AM