So, I know I've mentioned that Chani likes to be up high.  Chris decided to test out how high Chani likes to go.  He's 6'4".  So, you can tell that she's pretty high up in this picture. 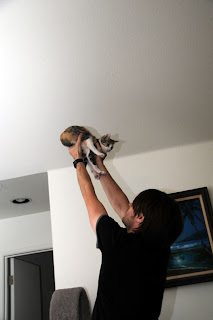 Let's just say, that she wasn't too fond of being that high while being held. I think she would have felt safer if she was on a tower that high, but not in a pair of human hands (no matter how big they are). 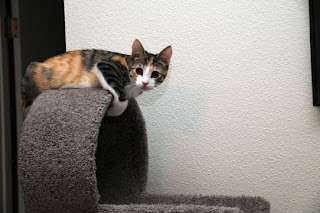 On the tower, after being held high. Yeah... she crouched down here and then hopped off the tower. 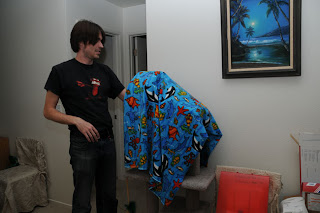 Later, Chris and I were talking about forts we played in as kids. Now, Chani likes going under covers. Often, I will go to sleep with her snuggling next to me under the blanket. Often, Chris will form the flaming blanket into a fort of sorts for her and she's incredibly happy to go in there. So, all of this led to Chris covering up the top part of the tower for Chani with one of Q's old blankets. 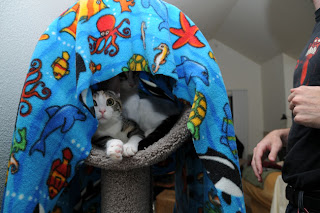 Chani quickly figured out how to get to the top.  So, did 9, not that he is fond of going under covers.  He actually doesn't like to go there at all.  However, this was something new that he had to check out. 9 spent a few minutes lying on top of Chani (she's so tolerant!) before hopping out. The tower is definitely Chani place of refuge and well, it's her spot.
Posted by Marlene at 10:04 AM