Bravery, SPAM is thy name 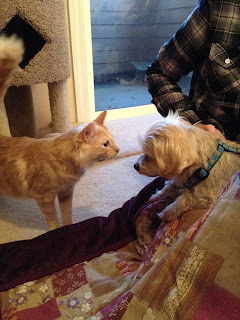 The other day, Fizzgig, Obie and Pica's mom came over with Pica. 9 did his best to scare off the 'scary' little woofie by getting big and hissy. Chani held the title of bravest for a little while because although she puffed out a bit, she didn't run too far away and later she actually kept a close eye on Pica.

BUT, dear SPAM-chan, my little boy who is the king of hiding in plain sight was the bravest of the three. He even tried to do a nose touch with Pica. And Pica, good girl that she is, allowed it. 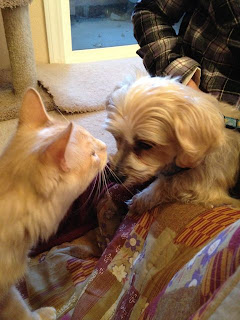 Such a brave boy! 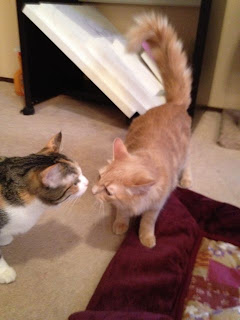 And he even did a nose kiss with Chani, who is getting much more tolerant of this little boy despite the fact he still goes up on her tower. Still, at least he knows that when he is fed, he goes up the green tower and not HER tower. Mishka, we're not sure how to help you out with your situation. We're sorry! 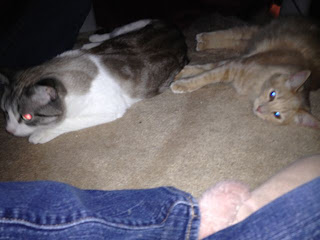 Then, SPAM-chan slept under the kotatsu with his big brother. They were even touching! 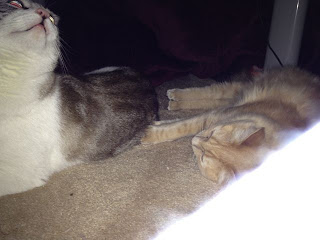 Actually, 9 has been very good with Sheamus Popoki. They haven't played much at all. But 9 did smack Sheamus Popoki in the head once, realized what he had done might not be acceptable and then ran off. Chani allows nose kisses but no charging at her.

Still, it's lovely to see my orange interloper gaining confidence and coming to greet me with the other two when I come home. He's not fully greeting me with purrs and stretches like 9, but at least he comes out from where he was hiding or sleeping.
Posted by Marlene at 10:30 AM