I mentioned the other day that Sweet Sheamus Popoki was ill. This happened a few months back. We had just finished having Popoki over as a guest. I had taken Popoki to my parents' and returned home. 9 and Chani were their typical selves, but I couldn't find Sheamus. Now, in the past year or so, Sheamus would join 9 in welcoming me home. I was a little concerned, but just kept my calm and thought, well, he'll come out when he feels like it.
After a while, I just had to find him. The stress and worry was getting to me. I finally did find him hiding behind the couch. I spoke to him and told him how much I loved him and to come out when he was ready. Well, not too long after, he did come out and yowled. It was quite odd and he sounded distressed. So, I picked him up and put him on me. He yowled again and just lay on me.

Now, Sheamus is not a lap cat. He's gotten more affectionate with me, head bumping my arm for pets or attention. So, when he stayed on me, I got even more worried. Finally, I just had to call the emergency vet. My boy was not feeling well and yowling. In fact, he yowled right as the vet tech answered the phone. She told me to bring him in right away and I did.

This was at 9pm at night.

I took Sheamus in, he was taken to the back. Not too long after that, the vet came out and told me that Sheamus couldn't urinate. He had a blocked tract. There were crystals in his urine and they'd clear it out, put a catheter in him and help him drain his bladder. They would also x-ray him to see if there were any crystals in his bladder. If there were, he'd need surgery. But, the chances of that were fairly slim as Sheamus is only 4 years old and such.

I was told to go home and they'd let me know if he needed surgery. I went in and said good bye to Sheamus who was quite put out that I was leaving him in a strange environment. I tried to tell him that it was for his best interests, but of course, he really didn't understand.

I went home, was a wreck and tried to sleep. Well, at 1AM, I received a call. Poor Sheamus did indeed have crystals in his bladder. Did I want the surgery performed? YES, of course I did.

The surgery was performed and Sheamus was kept at the vet for a few days. Fortunately, I was allowed to visit him.

Here is Sheamus at the vet, seriously unhappy with me. 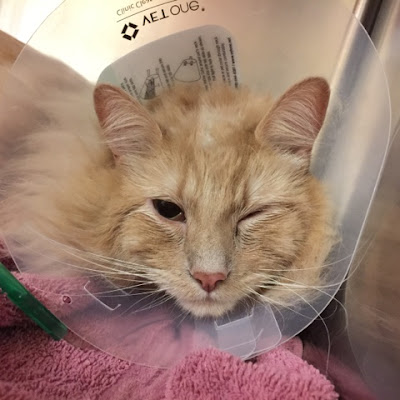 You have betrayed me... 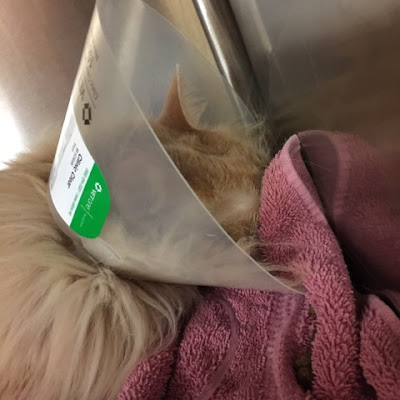 Not going to look at you

After I brought him home, I tried to make him as comfortable as possible. 9 would hiss at Sheamus because he did smell quite differently. 9 got over it sooner rather than later. 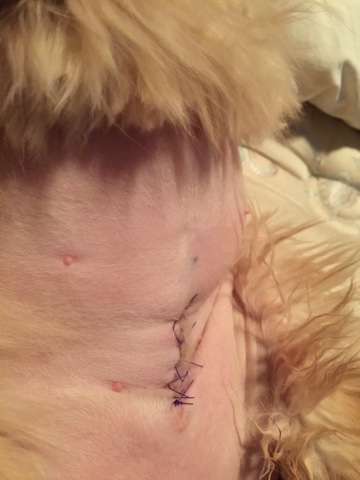 My stitches... and my missing belly fur... whimper 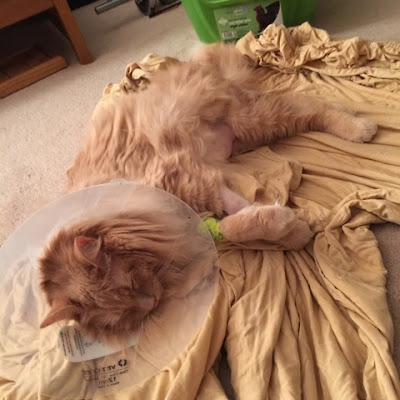 When I brought Sheamus home, he could barely move. He also couldn't control his bladder.  I'd pick him up and move him and he would urinate. So I covered the front room with a sheet I don't use and bought a bunch of puppy pee pads. I bought a new litter box that was uncovered and low to the ground so Sheamus would have an easier time going to the bathroom. The hardest part was to stop 9 and Chani from using that litter box. I also confined Sheamus to the living room during this time. 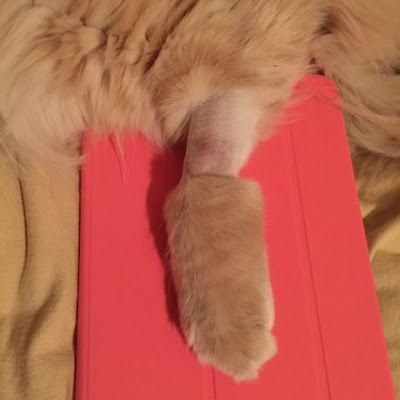 My shaved paw. You can see the needle mark. 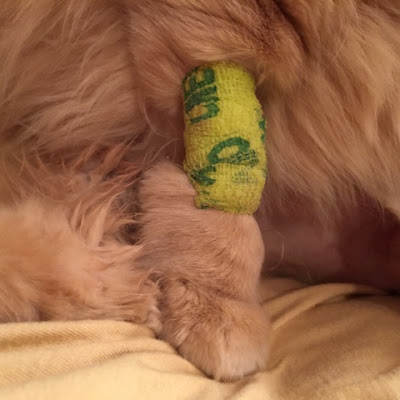 My other paw. This time with a green bandage. I'm not sure why I have the bandange and Mama Marlene doesn't remember. 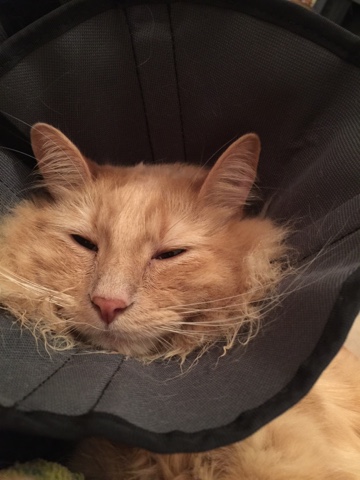 Eventually, she put a soft collar on me because I was having a hard time eating with the plastic one. 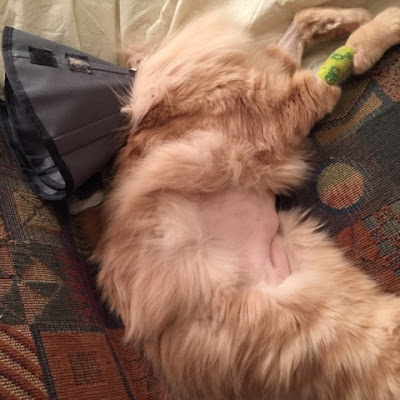 It didn't take too long, but Sheamus did return to his rather shameless ways. 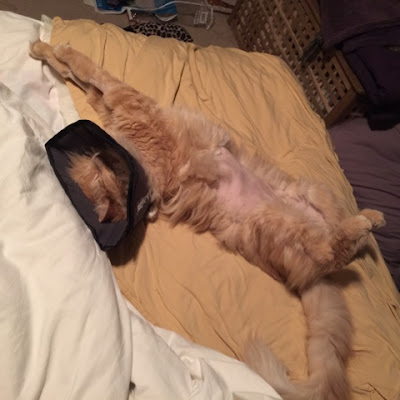 No belly fur to stroke, but Sheamus still shamelessly showed his belly. 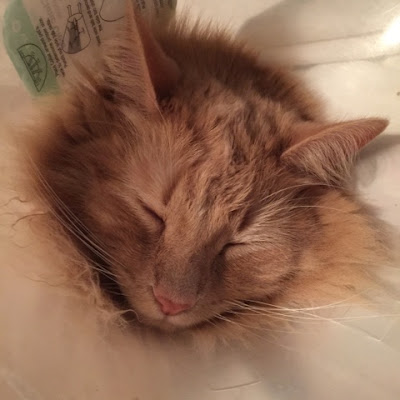 I would interchange the plastic cone and the soft one. After about 2 weeks, Sheamus was cone free and stitches free. 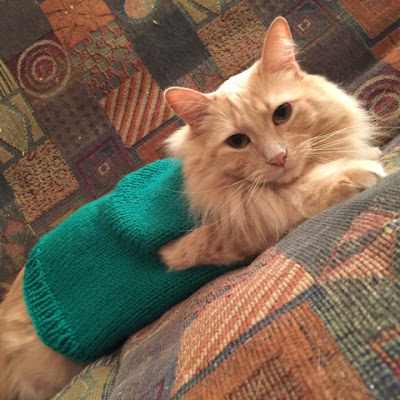 It was starting to get a little chilly, so I asked my mom to make Sheamus a sweater. He obligingly wore it for about 5 minutes before wriggling his way out of it. 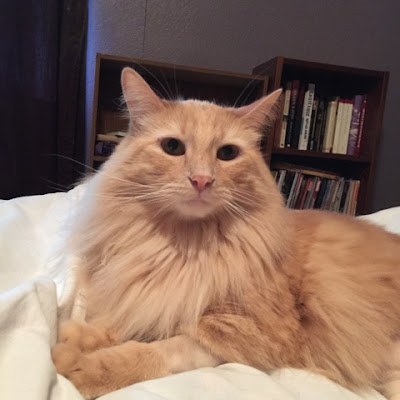 I am feeling much better now and allowing Mama Marlene to hug me again. And I am head bumping her arm for pets too. 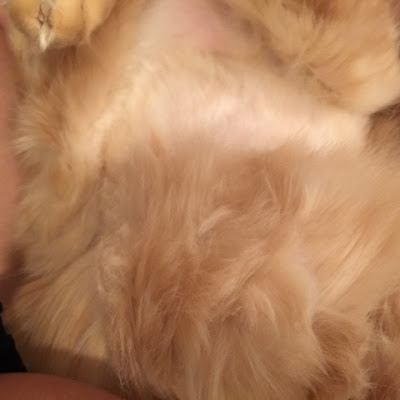 Sheamus' belly fur isn't grown back yet, but it's getting there. The undercoat is in and he seems to be working on growing his glorious long fur. 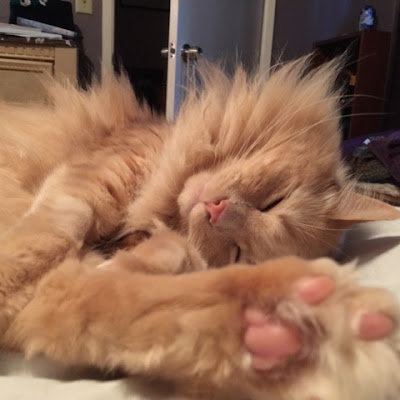 My sweet boy is feeling much better and being his typical sweet self. Now, I get paranoid about him and if he is peeing. Also, he's on a special prescription diet which he doesn't like at all. He likes the dry food, but not the wet. I'm mixing his prescription food with some low ash cat food. He likes the low ash stuff, and eats around the prescription. I'm just going to have to keep a very close eye on him.
Posted by Marlene at 10:36 PM