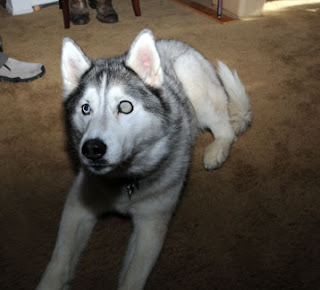 Every year, Mom goes to two New Year's Day parties. The first is at Pam and John's where Mom used to dog and kitty sit. Back in the day, it used to be Conan, a giant but extremely gentle Siberian Husky, and Natasha, the epitome of tortie tortitude. Nine years ago, the scamp pictured above, Sonia, entered everyone's lives. Sonia is one of the few dogs that Mom will allow to lick her (Mom isn't too fond of doggie licks, but she loooooves hugging them). Sonia was a rescue puppy and a Siberian by the looks of it. She also has glaucoma which rendered her blind in one eye. Every night, she gets eye drops to keep the pressure down in the bad eye and then she gets treats.

Conan crossed the Rainbow Bridge a number of years ago, but Natasha is still around. Too many people were in the house, so Natasha hid and Mom couldn't take pictures of her. But, Sonia was around and posed prettily while Mom waved a bit of roast beef in the air. Yes, Mom gave Sonia the roast beef once the photo shoot was done.
Posted by Marlene at 4:26 PM