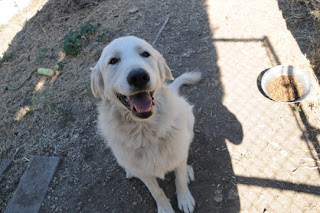 Yesterday, I went into the rolling hills of Santa Clara to any area called, Spring Valley, in order to help prepare for a season of wood firing. The kiln is on a property of some pottery friends and their animals. Above is one of the newest members, David Henry. David Henry is a very friendly guard dog, whose job it is to protect the herd of goats (no pictures of them in this round, but I'll be sure to take photos of them the next time I go!) from the local coyotes and mountain lions. He's a really sweet dog who loves human attention but is also very good at his job. 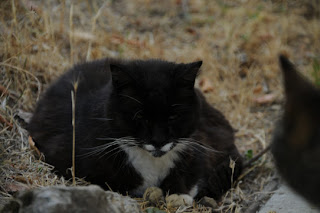 This is Mr. O. He's one of the oldest members and came to live here to take care of any potential mice or rat invaders. He's quite the gentleman, and doesn't mind a few scritches from the humans. 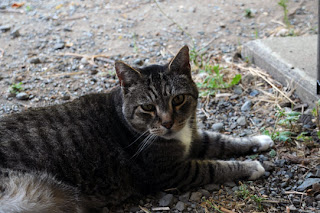 Mr. Eeke is another feline protector against rodents. He let me pet him a bit, but the clicking of my camera was too much for him, so he went off into the shrubbery to find a safe place away from me. Still, he's quite a handsome tabby with beautiful yellow eyes. I shall try to take more photos of him during the kiln firing season (which should start in about a month when the rains start and last during the rainy season). 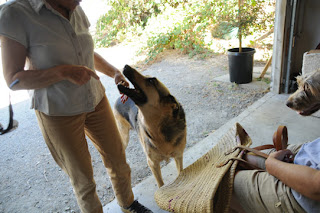 This is Ginger. She's one of the crowd who have lived here for what seems like forever. Another veteran member is Ratso, but I was not able to get a picture of her... Next time... Ginger's a sweet German Shepherd, but she was misbehaving a little bit with the introduction of David Henry. Ginger was used to being the biggest dog in this family, but now, David Henry is the biggest. Still, there weren't any fights while I was there and their owners are making sure that life stays harmonious amongst the animals. 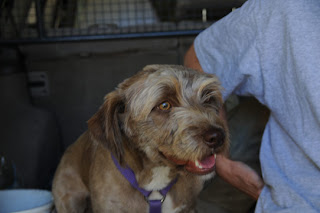 This is Buddy. He's another new addition. Stocky and powerfully bit, he's a sweetie too. He's got a girlfriend who lives across the street. Her name is Mazie (seen below) and is quite the swimmer. While I was in the Spring Valley, it was really hot, about 92º F, so Mazie cooled off by jumping into the pool and doing a few laps. 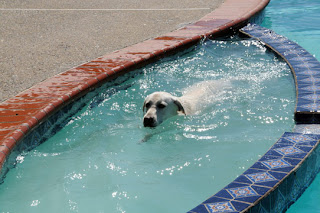 Spring Valley is quite remote. You can see vultures flying overhead. I took a few shots, but this was the only one that wasn't blurry. I shall have to work on my photographic technique to get better shots of this bird. 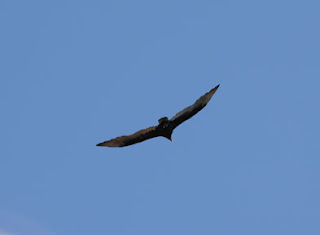 A small lake... this is the view from Mazie's back yard. You can see how dry it is and why we have to wait until the rainy season to fire the kilns. The thing about wood fire kilns is that you start it up and continuously stoke the kiln for about 5 days straight 24 hours a day. This can be a fire hazard if you are not careful and of course, we don't want to worry the residents of this area. 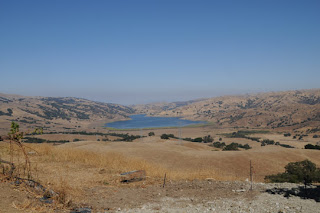 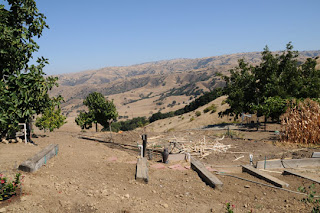 Here are some fruits and vegetables growing in Mazie's garden and orchard. 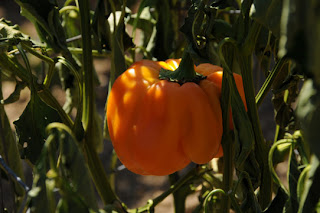 Unfortunately, t's been too hot for Mazie's human to keep these plants freshly hydrated and so most of his peppers have died. Still, there were some vegetables that survived. I loved the orange of this pepper and just had to take a picture. 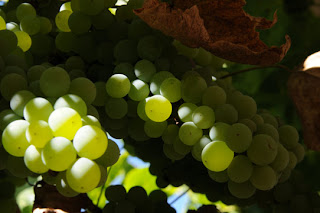 Some grapes. They were tasty! I took a lot of photos of these. I love how some of the grapes seem to glow.

Finally, just to show you that I'm not neglecting my two kitties, here's a shot of Chani playing with the ball in a tube. She would bat at the ball, get it going and then roll over on her back. Not the most lady like position, but hey, belly! 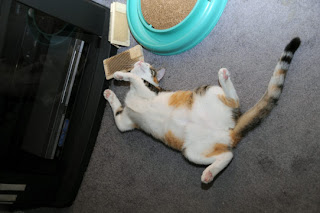 Hope you had a great weekend!
Posted by Marlene at 1:48 PM