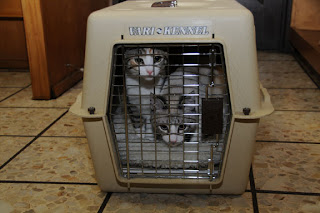 9 and Chani visited the V E T for the first time.  Getting them into the carrier wasn't hard, but 9 can be quite the escape artist when he puts his mind to it.  However, it only took 2 tries to get them into the carrier. They were quite good on the long drive to the vet.  I took them to see Dr. Saito who was Q's vet.  Although, the drive is about 40 minutes long, I know and trust Dr. Saito and wouldn't dream of taking them to anyone else. 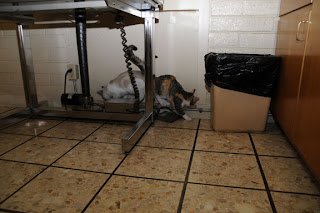 As soon as I let them out, they immediately began to investigate. It was slightly bittersweet to be in this room again as it was the same room where Q was helped across the Rainbow Bridge. Still, it was good to see 9 and Chani being so active, engaged and not freaking out. 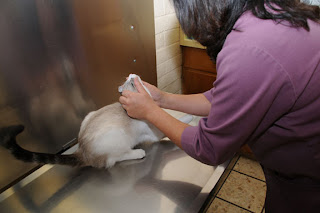 9 was pretty good as Dr. Saito examined him. He took the thermometer pretty well considering how uncomfortable he must have been. Oh, and in my infinite ability to NOT pay attention to details, it seems that 9 is a month older than Chani. Silly me, I always suspected that he was older, but never looked at his adoption paperwork that actually said he was a month older. Sigh...  So, he's an October kitten and 7 months old now. 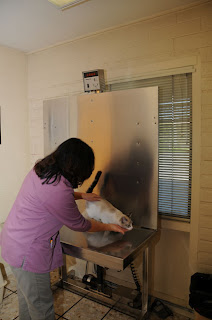 9 on the table.  He wasn't too squirmy.  Hehe, but he did purr a lot when Dr. Saito was trying to listen to his heart and lungs. Dr. Saito did say that he has a long body and since kittens are very active at this age, his weight of 6.4 lbs is just fine.  (I worry about their weight a tiny bit since Q grew up to be a hefty 16lb cat who had to be on a diet for the latter half of his life). 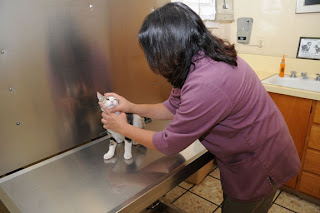 Chani was also a good girl when she was examined. She weighed in at 5.4 lbs. Such a delicate little girl. Dr. Saito said that her proportions are good and that she seems to be growing very well. Chani didn't take the thermometer very well. She squirmed so much that I had to hold her when she was getting her temperature taken. Took less time than 9, thank goodness. Chani is now 6 months old, a November kitten.
Jeez, both kittens are probably Scorpios.  According to my horoscope charts, as a Leo, I'm supposed to get along well with Scorpios.  And Q was a Scorpio too.  I find this kind of amusing.
Both 9 and Chani received Rabies shots. A vet tech came in and held 9 as he got his shot. He didn't mind at all. Chani, on the other hand, was not so oblivious. I held her mid section. The vet tech distracted her and Dr. Saito administered the shot. Chani meowed and swatted at the vet tech as she got her shot, almost as if to say, "How dare you!" She calmed down right after the shot. Such a prissy little lady!  Surely, she is the Queen. 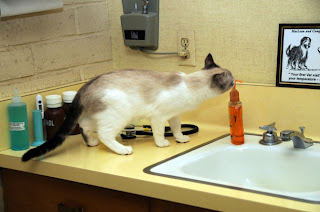 After their exams, the two of them continued to investigate the area as I chatted with Dr. Saito, reminiscing about Q and describing the joys of having these two loves in my life. 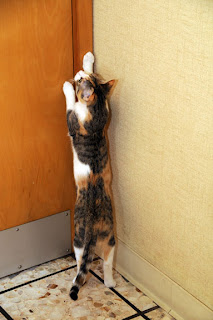