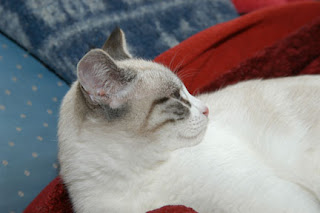 9 was not an easy cat to name.  When I adopted him, he was called Joker.  And although he is quite the playful cat, somehow, I just didn't want to call him Joker.  (Joker and Harley Quinn were an idea to name the pair, but I said 'no' to that.)
Whereas Chani's name was settled on early on (about one day after I brought them home), 9 was a different story.
Some names thrown out were:  Paul, Usul, Charlie, Muad'Dib, Ink butt (because of his tail being black... and I'm not going to mention some of the more crude names that were suggested...), Data, Dante, Pally (short for Paladin, a character class I play on World of Warcraft), Mak...  Did I mention that I'm a big sci-fi/movie/video game geek?
There were a variety of reasons why we rejected names... they were human names, names of people we knew, or names of cats we knew.  Usul was out, because, despite 9's relative strength, he just did not look like an Usul.
9 just had to be named from a literary, sci-fi, or movie reference.  That was the main requirement, but nothing seemed to fit.
Now, the morning before I adopted these two, Chris and I went to see the movie, Watchmen. One of the previews was for a movie called 9 that will open on September 9, 2009 (yes, 9-9-09).  This movie looks really awesome and considering how Chris and I met at a school where we studied 3d animation/modeling... well, let's just say we're eagerly waiting for this movie to come out.
So, on the third day or maybe the fourth, Chris  suggested 9.  I think he had mentioned it before, but I wanted a name that had harder consonants in it.  This time though, the name felt right.
And so, 9 got his name.
He also has a ton of other nicknames depending on how he's behaving... but 9 is his official name now.