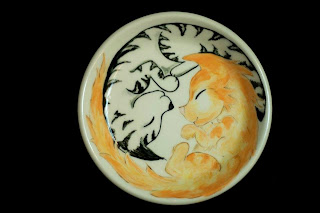 I think I might have shown off some of my yin/yang kitty plates. I've been painting these for the past year or so. Each plate is different (so many types of kitities out there!) and I have a hard time keeping these in stock. In fact, the one above is the last one in my stock and I have promised it to a charity auction that will be coming up. I used to paint back in the day and stopped.  Pottery sort of took over my artistic endeavors. However, recently, I started on painting on canvas again. Which led me to paint on boards.

I really like the finish that comes with that medium.

Originally, my goal was to build a body of work large enough to start selling at my local farmer's market in August. I just need time and of course, subject matter.

Cats were definitely the main focus. Imagine that! ha!  At any rate, I knew I could paint cute cats, but I wanted something more. The images had to be simple and yet show off that I can, in fact, paint and draw. 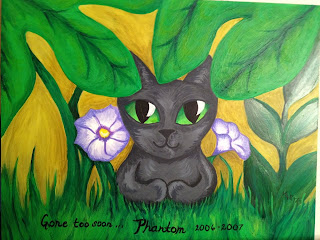 Now, during a manic phase where I was posting a sketch a night, I drew one based on a friend's cat who had crossed the Bridge (she had sent me a photo of her darling Phantom). She told me that if I ever did anything with that sketch, she wanted it. And so, I did the above for her. So, my style of cat was basically set. 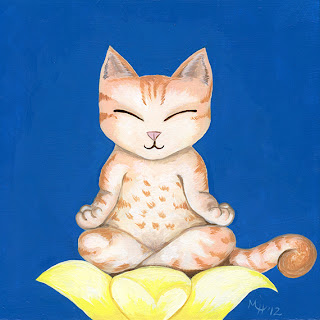 After a conversation with another friend about my painting as well as how much I was enjoying hot yoga (yes, Bikram yoga... I'm no where near the point where I can do all the poses, but I am starting to enjoy the heat), plus seeing little wood carvings of kitties meditating, my friend suggested combining them all. After all, cats and yoga... they sort of go together. 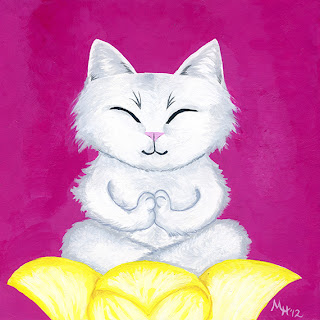 And so you see the first two paintings. I haven't been able to do more because of time constraints. But, I do have plans for a few more. I'm thinking a Rainbow of Meditating Lotus kitties. Eventually, 9, Chani and Sheamus Popoki will make appearances in these (Chani will be on an orange background, Sheamus Popoki on green... I haven't decided on 9 yet. Purple, perhaps).

I have created a few as cards on Zazzle, but those are kind of expensive per card. And so, I'm looking into other print options and opening up an Etsy store. I'll keep you all informed with how that goes!
Posted by Marlene at 1:20 PM